Shoving off of Katfish Katy's banks at 5am gave us a jump on the day. Starting your paddle in darkness and allowing the sun to glow across the river before it rises is magical. Then, when you've been waiting for the glow to turn to light, it happens. The sun peeks over the land and illuminates the water, your face, and the land surrounding you. Life starts again. Day 3.
The plan for the day is to get to Wilson serenity point (known as Noren access to commoners). The team decides we need to stop at Cooper's Landing  before we get to See Joe Wilson at his native land. Paddling down river we have some interesting moments. Two in particular are when we " Had out shit together". AKA we all had our tree crouching moments of relief. More interesting was the vehicle we saw submerged in the water. Wierdest thing of the race, other than the motley crew configured on the Greystoke had to be the newer VW car that was 90% submerged off the river bank. 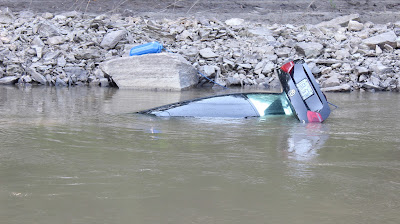 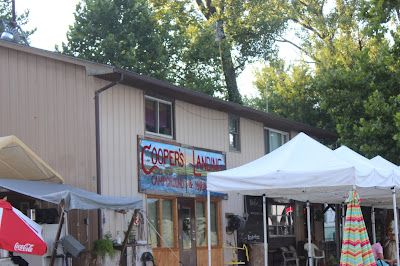 Approaching Cooper's landing, which if you haven't been, it's a must see landmark on the river. Good people, good food, and good times. We pull in to the boat ramp to some hootin' and hollerin' by resident Churchill Clark, a descendant of you guessed it, the Clark of the famous Lewis and Clark expedition.  "Church", as he's called by some friends, is the great-great-great-great grandson of William Clark.  In life he's found himself as a dug out canoe carver, river lover, entrepreneur, and public speaker.  We spend some time with Church and check out the latest canoe he's chopping on.  We also get a glimpse of his most famous dugout, affectionately named Knotty.  Works of art hand carved with primitive tools. Church literally set up camp at Coopers with a tent and works from home.
Church meeting us on the ramp of coopers with Dale 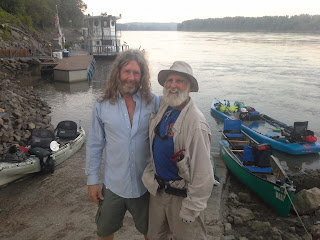 Jerico, Churchill, Dale, and me on Church's canoe in process 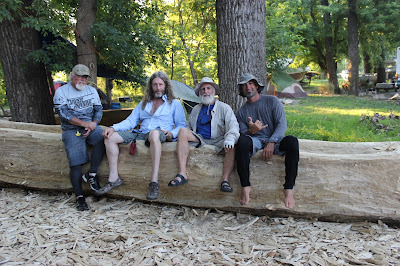 Dale next to the world famous Knotty 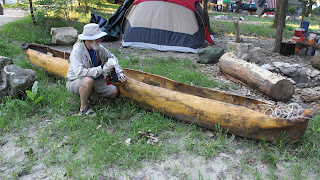 After we wolf down some made to order food we say our goodbyes to Church and the locals. Pack up Greystoke and make our way to our most anticipated stop.  A few short hours and we pull into the most well maintained sought after stop of this whole race, Joe Wilson's Serenity point. Brenda is there with Ron prepared to help us in any capacity, TJ as well.  Rod Wellington, (a traveling paddler from Canada known for Paddling long rivers, writing books and poetry, and  living life has been following along the trip and popping in and out to say hi.
However, Jerico and I are mostly interested in talking to one person, Joe Wilson. Joe was the most kind and genuine man you will ever have met. Always smiling, always there to give you a hug or a handshake. Just, not one to always having his teeth in. He'd make you laugh by his laughing and saying, Dang it Shane, I don't have my teeth in. No-one cared teeth or not. We loved his smile. Joe tirelessly created and maintained this boat ramp and every year paddlers looked forward to being there.
We found Joe and spent all the time we could with him. Even people that had never met him Like TJ and Brenda found he left a lasting impression.  TJ later told me he felt he knew Joe all his life. He was that type of man.

Jerico and Dale have a chat with Joe 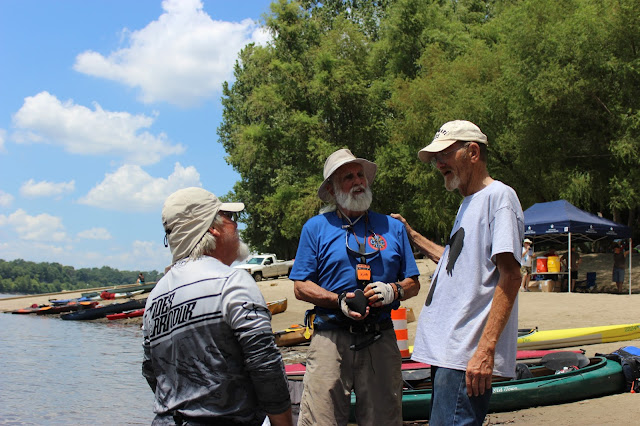 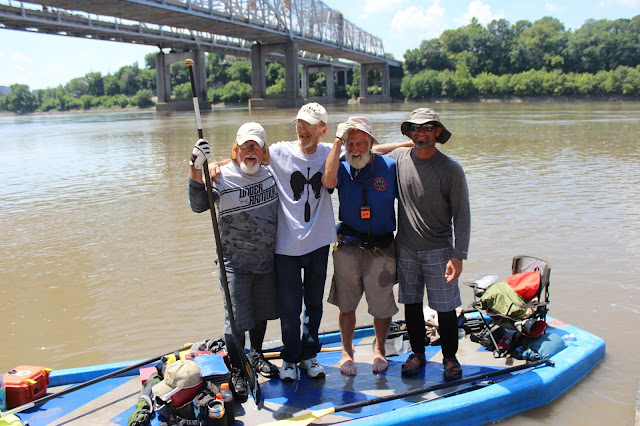 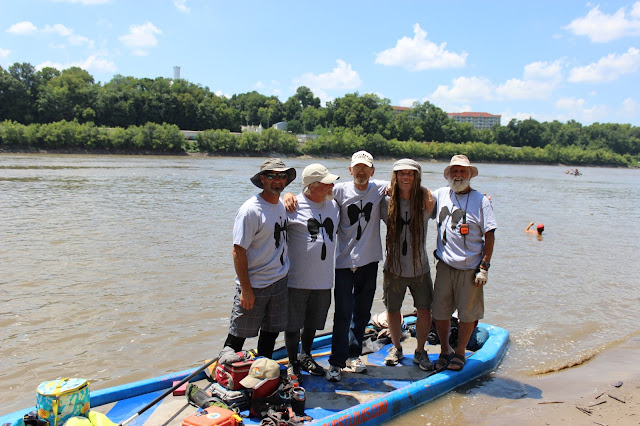 We lost A treasure a few months after the this race was over. Joe lost his battle to cancer. Jerico and I did get to see him one last time in the hospital a week before he passed. Even then he was smiling and laughing, no teeth and all.  One thing  he said in the hospital to us that stood out was he always thought he'd be a hell of a paddler. He wondered why he never took it up. Yet, Jerico and I knew why, because he was a river angel. He watched over all the paddlers coming through his boat ramp.


Departing Joe's home turf we made way down river with our hearts full. 223 miles into a 340 race and we now know we have a distinct possibility of finishing as long as nothing happens unexpected. The next distance to the Hermann checkpoint is a long one, 46 miles. We have quite a bit of light left in the day and figure we can make Hermann late evening/early morning.
Although it's a long stretch it flies by. It's as if our meeting with Joe has reset our bodies and minds and we have the spirit of the pre-race.

My teammates and I assume the usual banter between Jerico and myself.  Dale seated in the rear of the board has a hard time hearing us. Yet, as always, when he speaks we listen.  It's along this section of the river we find an interesting discovery.  Back in the late 50's Dale worked in a naval hospital in Hayward,CA. At the time Jerico's Mother worked at the same hospital.  As we chatted, the math worked where Dale technically could be Jerico's Daddy. We all had some good laughs and henceforth Dale became Daddy Dale to Jerico. Then as the Math Worked out I technically could have been been Jerico's son. I just called him uncle Jerico for some reason.
We Spent the time swimming off the side of the board, munching on snacks, and entertaining ourselves the best we could. The time flew. We made Hermann at a decent hour and decided to spend some time and rest.

Our fearless crew, Brenda says it all. Tired and beat up and Why The F are you taking my picture? 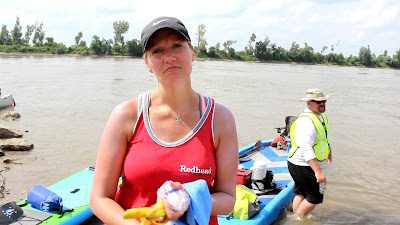 In the safety vest is James, a checkpoint volunteer

It's here we really met James Crawford.  A 340 volunteer, prior 340 participant, and Insurance fella by normal day life.  He had the personality that fit in with our crew.   The team, crew, chip and Phil-O-cookie;  James was one of the fun wierdos. An intelligent guy that liked to joke and have fun. After we all ate I ventured back down to the boat ramp to chat with him a bit.  The rest of the crew slept and I asked james' story.  He nearly finished the 340 a year prior but had made a pact with his brother that if one of them pulled out so would the other. Unfortunately his brother had decided to pull out.  As we talked I told him that if he really wanted to finish the 340 that in 2017 I'd be happy to have him on my craft.

Yep, James catching a nap on the Hermann boat ramp 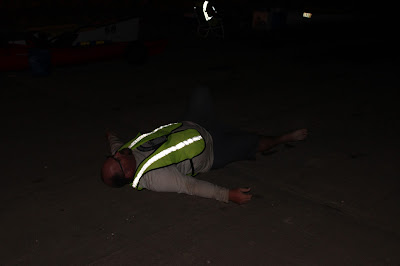 At the Hermann ramp Chip and Phil catch up to us and rest. It's dark and late and we have 42 miles to get to the Klondike checkpoint.  There's no way we want to paddle through the night without sleep and get into Klondike so we decide to break it up. About half way there's a boat ramp at new haven. It's not the best option as there are trains that run through the area but it's the only feasible option at this time. So the Greystoke trio followed by Chip and Phil-O-Cookie set out for New Haven in the dark.
It's good to have Chip and Phil in tow. Chip adds a humor that can't be replaced. Always happy and smiling. Always positive. He's a great person to be with o and off the water. Phil is quiet and reserved. I've known him a few years now and he selectively speaks. This race he's opened up a little with Phil-O-Cookie humor. When he speaks, he slips in some funny goodness.

We make New haven.  Essentially a parking lot with some patches of grass that butt up to railroad tracks. Ron (crew) and Brenda are waiting and it's here we decide to get some good sleep for a few hours.  Dale disappears and we all decide he just knows how to find the quietest spot (away from us). We all fall into tents or vehicles and crash.

An early morning start and we're closing in on Washington. It's not a checkpoint but just a cool place on the river.  It's about an hour upriver from Washington where we find ourselves in a violent storm.  Winds, rain, and all kinds of water chop.  We maintain paddling through it all and are suddenly confused as the Washington fire department makes a beeline towards us on a rib boat.  They ask for me by name and I say good morning or something of the sort. They apparently were alerted by my spot tracker that we were in distress.  The funny part is Phil-O-Cookie is using my spot. So I ask him if it's been activated for SOS. He checks and nothing of the sort has happened. Dale also has a spot and checks his. Nothing.  An odd occurrence that at the end leaves all parties involved puzzled. (post race we find that Dale's spot tracker malfunctioned).

Odd occurrence behind us we paddle on and make the Klondike checkpoint. Brenda and Ron are waiting for us and it starts to mist/rain. So we all pile into the sup van and chow down on some Hardee's breakfast. 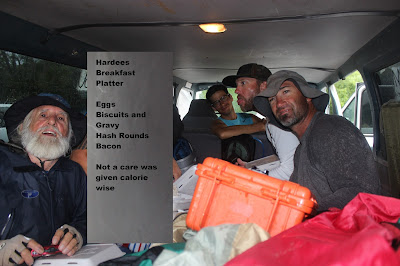 Our Crew Brenda and Ron 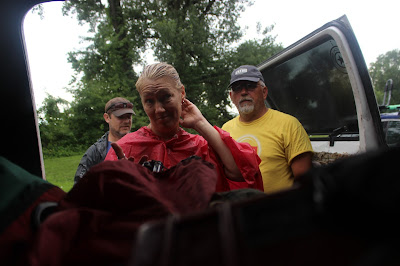 The Final Push!!!
Leaving Klondike is an amazing feeling. Knowing that in less than 5 hours you will be on land where your pain and suffering is done. You'll no longer need to paddle. You can be with family and friends. Drink a beer or 20. The feeling of accomplishment overwhelms and your body thanks you. Yet, for us paddling, we were a bit saddened. The past few days brought us together in a way unlike what you can find in life. The river has bonded us together in a way we have become this wierd little family. We don't want it to end but are eager to finish.

Phil-O-Cookieand Chip on the final stretch 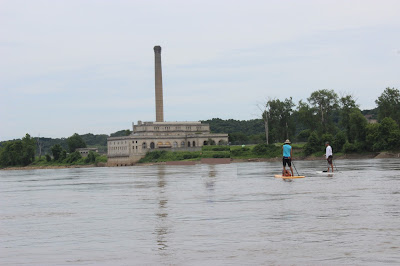 Approaching the finish is a rush of emotion. Each individual has a different one. Jerico has attempted this race 4 times and had yet to cross the finish line. This is is his first. Dale, at 81, was uncertain if he'd be able to make it through. Chip dealt with a disgruntled paddler but remained happy and positive through it all.  Phil-O-Cookie was smiling the whole time and said it was fun. 340 miles over 4 days and it was fun? got to love Phil. For myself this was a monumental race. Paddling a craft my friend Daren and I built in 9 days. Doubted by many. Winning over all. Learning who all these people in my group were as the days passed. Seeing the river differently than my previous four 340 races.  Touching lives by our actions and not words.  It all became my most cherished race I have done to date.
Dale celebrating at the end 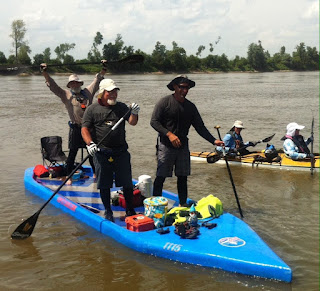 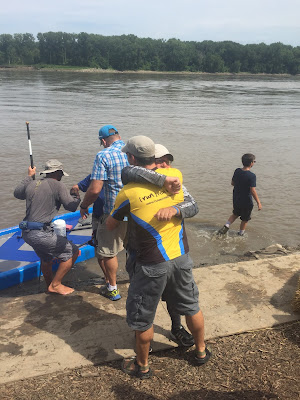 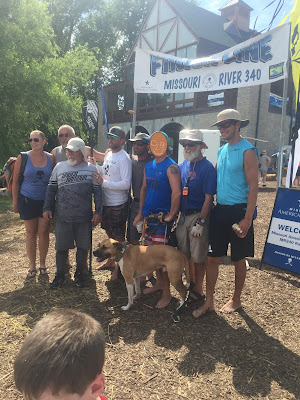 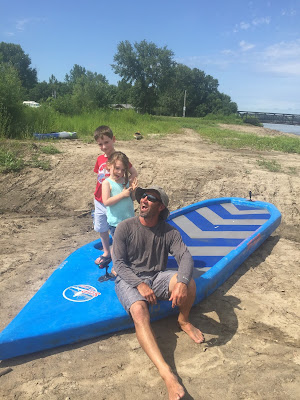