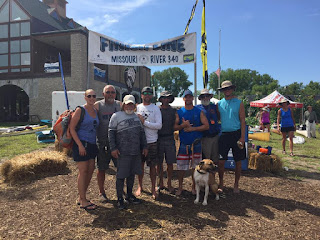 Those of you that know me understand the MR340 is a race close to my heart as it's in my backyard here in Missouri. It's where I found myself back in 2011 when I became the first SUP to enter and complete the race in a sea of kayaks, surf ski's, and canoes. Out of 117 vessels that year I placed 34th. Not too shabby for a guy standing up. I thought that was a pretty good accomplishment for myself and by far the most memorable 340 I would ever have.  Little did I know 5 years later (this year, 2016) would become my most coveted 340 race I have ever had and probably will.  Why? Because I found a new family on the river (oh, and there's that whole 3 man sup thing too)  Read on.

Since my first 340 in 2011 I've tried to figure out how to get more SUP's to enter the 340.  It's a grueling, heat filled slog-fest that takes a special person to complete. People paddle 340 miles over 3-4 days on the Missouri river starting from Kansas city ending in St charles, MO. We've had a couple solos enter a couple years after like John Straub of Seattle and Local friend Blake Thornton (2015 record holder) but never have had a lot of stand ups in one race. In the fall of 2015 I came up with the idea of trying to bring more SUP paddlers by creating a group that would go down the river together. I asked a select group to paddle with me. First asked was Chip Walter,  a friend I met in 2013 while racing the 300 mile Florida Everglades challenge. A seasoned paddler who I knew could handle the race.  Chip's best attributes is he can assume a leadership role when needed but also can follow when needed. A trait hard to find in people. 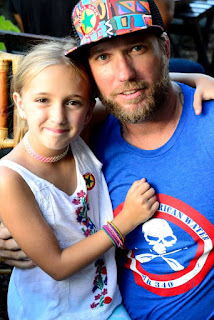 Chip With His daughter

Next was a friend  that has emerged over the years that had zero sup experience except a 20 minute "here's how to sup" 2 weeks prior to the race. Jerico Lefort, A.K.A. The traveling Gnome.  Having never been on a SUP before,  he would seem a very un-likley person to ask. Yet, what he lacked in experience he more than made up for in grit and determination. 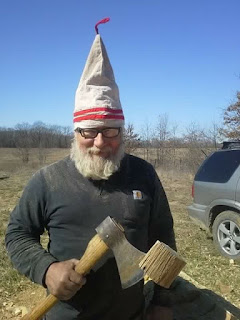 Dale Sanders A.K.A The Greybeard adventurer.  I met Dale about 6 months prior to the race as he was giving a talk and showing a video about his 2015 source to sea paddle of the Mississippi river. Yes, at 80 years old he paddled the entire Mississippi  in 80 days. As you've already guessed from his Picture, Dale is no kid. But that was no concern to me. He's legit on the water in every respect. Asking him to join the group was Jerico's idea. It came from a picture from Dale's talk. He was a great choice to join us.
left to right: Jerico, Dale Sanders, Janet Mooreland, Me 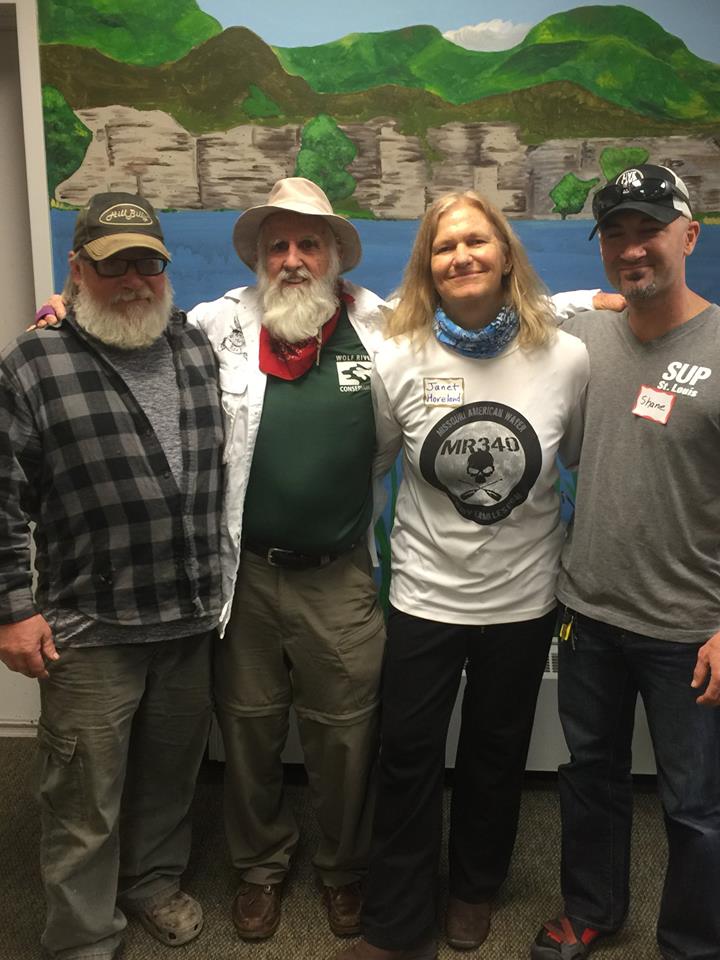 Phil Rodway
A.K.A. Phil-O-Cookie
Phil is a heck of a paddler. Quiet and introspective, he's a person of few words. But he can paddle. He has never attempted a  race of this magnitude.  This was his first ultra-distance race. Longest one prior to this was 50mi. You may ask why Phil-O-Cookie? Well, just because. Everyone needs a nickname.

Phil-O-Cookie on the yellow Bark board 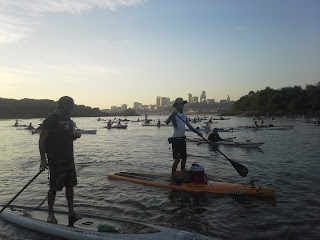 Joe Alfafaro.
Joe Owns Alfa SUP in Springfield, MO. He's immersed in the business and does a great job supporting and building the sup community there. Joe was the least seasoned long distance paddler on the team, but I knew he was a good person to ask as he needed the test and knew he'd go all out to finish. He chose to paddle an inflatable sup for the race, one of his own design. Ambitious and ballsy. 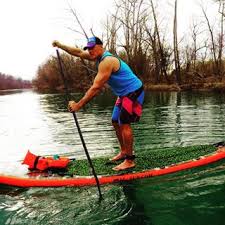 Lauren Rodriguez
I met Lauren at a race a year prior. She's from the west coast and has a lot of experience on a board but never has taken on a race of this length.  She's an athlete. I knew she wold train hard for this and be ready. 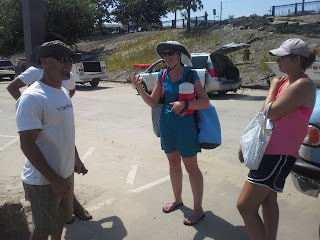 Frank Drelling
Frank is friends with Lauren and they are training partners. They prepared for the race together.  In the Same boat as Lauren, never having attempted a race of this length before, but also the same, Frank is an Athlete.
Frank far right 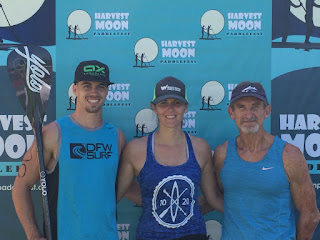 Ryan Fullerton
I had never met Ryan prior to the race. He's friends with Joe Alfafaro. The youngest of all the team I wasn't too worried about him. Not because of his youth, but because of his military background. A strong smart guy, well capable of this race.

Last but not least we needed a crew member to drive the Big Blue Van to meet us at each checkpoint and haul our food and supplies. To make trips to the store for supplies that were needed as the race developed and stuff broke or went wrong. To essentially keep us together and healthy. Brenda Herndon was originally dedicated to be Lauren's crew.   Fortunately for us  Lauren's father offered to be in a safety boat following Lauren documenting her 24hr record attempt and serve as her crew. Leading us to pick up Brenda as our dedicated crew.
Brenda                                                       The big Blue Van
Brenda deemed it Big Bertha B*tch 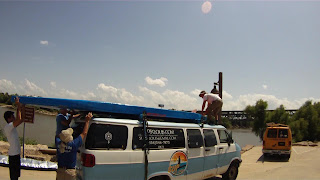 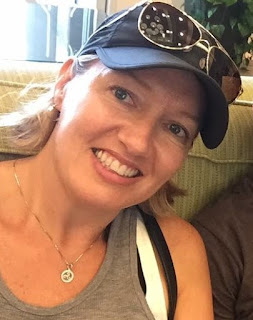 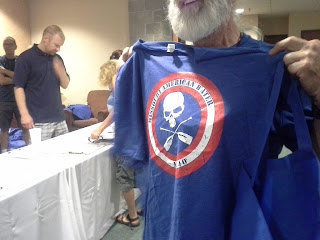 After we all check in for registration and go through the safety briefing we head head out for a decent night's sleep. We awaken to some scrambling and getting everyone fed and loading the van and make the 20 minute drive to the race start.  The start is always a little chaotic. Boats flood the launch ramp. Cars crowd the lot. Foot traffic is plentiful. If you want to get in the water easily you need to get there early or scurry down a bank. 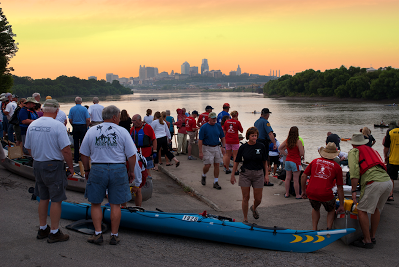 The plan was for everyone to start together and go down the river together. The plan changed drastically fast.  The 4 man sup was supposed to have just that, 4 men. Days prior, our 4th man had to bail due to life circumstances. So Now there were only 3 of us left to paddle a 123lb one of a kind sup. Jerico, Dale, and myself. This meant we would be slower than anyone. So I told Lauren to just go as fast as she can. (She was attempting a 24hr moving water word record).  Frank and Ryan would stay with her and keep her motivated. I saw Chip on the water that morning and told him to stay with Lauren as well. Also, the Phil-O-Cookie. So now the big blue board would be its own entity going down river. 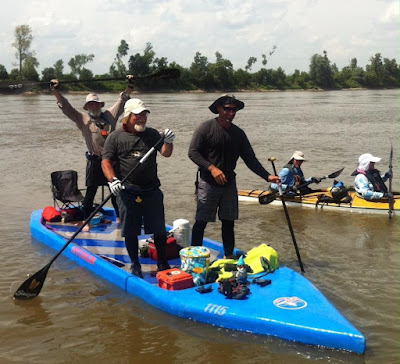 So I should probably explain the big blue board that came to be know as Greystoke.  The concept of a multi-person board has been explored most recently via inflatables hitting the market. With price tags ranging from $1500-3500 you can get a floating air mattress of your own. The problem with them is that the when the person next to you moves it shifts your balance.  It becomes less about paddling and more about counter-balancing.  Hence the idea of a rigid 4 man sup, not a completely new concept for SUP's. The most famous 4 man I'd say would be the quadnundrum made by Steve Boehne of Infinity sup, built for 4 people to stand inline.
The greystoke (received it's name during the race due to all the grey facial hair on board and the stoke we experienced) was designed for 4 people to stand shoulder to shoulder or staggered depending on conditions, and also able to hold plenty of gear for everyone. Essentially a long hauler designed for decent speed and large carrying capacity.
The board was built in 9 days by myself and good friend Daren Wolf.  The last Hotcoat was applied to the board 2 days prior to the race. Generally you want a board to "cure" for 7 days before touching water.  While loading the board the day before the race it was still tacky.
The first time the board hit the water was 20 minutes prior to the race! 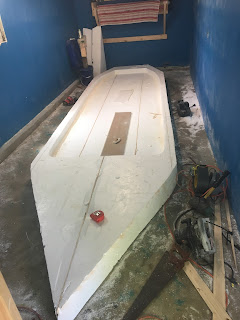 We were so crunched for time race day we didn't bother to carry the board to the boat ramp. Nope, just scurried down the steep slope on Kaw point with the  risk of dropping it on a rock or root. Yet, the board hit the water, supplies were thrown down the hill and dropped on it. The 3 of us hopped on and a paddling order emerged. I stood up front, Jerico in back of me, and Dale manned the rear. Keep in mind not only was this the first this board hit the water, it also was the first time the three of us paddled together.
A quick launch and the learning curve began. We figured out pretty quickly the board floated. Paddling was easier than we thought from a good hull design.  Surprisingly,  maneuverability was smooth. We took to the starting line, had about 10 minutes to prep, paused for the singing of our national anthem, received our 2 minute warning, a countdown from 10, and a race start commencing from a cannon being fired.
We managed to keep somewhere middle of the pack for the start. By about an hour in we fell back towards the rear of the pack.  No worries, being a veteran of the race I assured the team this was a long haul, all we had to do was make the check points on time and we'd catch plenty of boats through the night.  The team put their faith in my abilities and paddled steady. We made the first 50 miles to Lexington, checkpoint 1,  in about 7.5hrs. As we pulled in I looked at Jerico and Dale and saw nothing but smiles. (I promise, Dale was smiling) 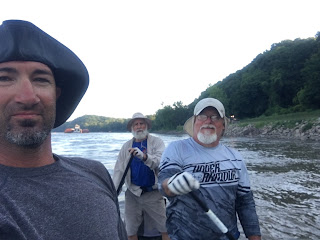 We didn't spend much time here as we had only beat the cutoff time by about 45 minutes.  We met up with Brenda and Ron Abel (crew for another sup paddler, but good friend of ours) and they took care of us. We didn't need much at this stop. Pretty much water took care of it.  Loaded back up and we took off for the next stretch to Waverly a mere 23 miles. The team joked about it even. 23 miles? HA,  piece of cake.

23 miles was only a few hours of paddling, an easy stretch after the previous. But again we were in a time constraint as we made the checkpoint with about 1hr 15 mins before the cutoff time and reaper boat. For those of you who don't understand the cutoff times I''ll brief it. The race is set up for you to make the cutoff times/checkpoints based on finishing the race in 88 hours or less (see below). Once the race starts there's a boat, deemed the Reaper boat, that if it catches up to you, you're our of the race (it's designed to arrive at the checkpoints near exactly the checkpoint cut off time).

In no time we left CP2 (Waverly) and made our way to the Miami Checkpoint (CP3) 32 miles away. This is a crucial checkpoint as it's decision time for all paddlers. By the time the vast majority of paddlers get there it's dark.  About 1-2am. They need to decide if they are going to try and get some sleep or paddle through the night. The next checkpoint is Glasgow another 36 miles. About 6.5 hrs of paddling. Keep in mind at this point we've paddled 106 miles already. I'm now asking the team to push forward with little rest and another 6 hours of paddling to go. Additionally keep in mind of my two teammates on Greystoke: Jerico has had 20 minutes total time on a SUP before this race. Dale is 81 years old and his max distance paddling in a day is about 40+ miles.  Yet, despite these facts, they were still all smiles and happy to press on. To Glasgow we go!