We spent some time resting at CP1 Miami. Each of us got a nap in. There's a lot going on there being the first main stop for paddlers to sleep.  They will have paddled a total of 106 miles in less than 24 hours and it'll be the wee hours of the morning around 2am. Their crews are setting up tents and van spaces to crash. Some folks sleep on the ground.  We kind of hung out and rested. Everyone got some good nutrition in and refueled for the night ahead.

Night time paddling was a slightly welcome change. The day's heat beat up all of us, myself included.  As we paddled through the night headed towards Glasgow we were all still in good spirits. Jerico and I talked quite a bit through the race as we both stood towards the front of the board. Dale was towards the back of the board with his camp chair propped up and seated as he double bladed. The combination of the splash of Dale's paddle, the distance between him and us, and his bit of hearing loss made it difficult for us to have a lot of conversation with him. Yet, when he talked, we listened. 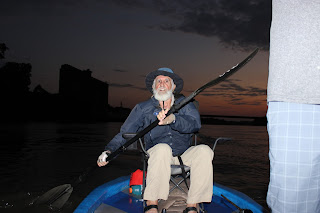 This race was a significant one for many reasons. The obvious, there never has been a 3-4 man sup enter the race. It was an untested vessel. I had a few people tell me the board would break under the strain of the race. We were definitely the under dogs with many people thinking we didn't have a chance to finish after losing our fourth paddler. Dale even had had thoughts of backing out after we lost the 4th paddler.  My choice for a team was questioned by many. Jerico had attempted this race four times prior to this attempt and DNF'd (did not finish)  each time.  Many people questioned him as a choice. I was asked if Dale could survive a race like this? I heard it all.

Even with all of this in the mix I knew we would finish.  Why? A few reasons.

I made a promise to Jerico in 2015, that I would build a vessel like none other and get him to the finish line. I guaranteed a finish! Pretty ballsy, I know.  That was good enough for him. Also I chose Jerico because I like underdogs. People that aren't usually given a shot. I knew what he had in him. What most people lack, Grit. It's something you can't teach. The man has Grit coming out of his ass! I knew he was a good choice and he wouldn't give up on me.

Jerico at a checkpoint 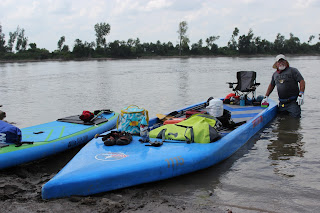 As I looked for a 4th paddler, Jerico suggested Dale. Jerico actually had asked Dale about it and Dale declined the invitation. So I reached out to him and told him what my plan was and that we were going to finish.  Slightly hesitant, he said as long as his health was good he was in. (later Dale told me he only agreed because he knew of me and what I was about. An awesome compliment). Did I mention he is 81? I wasn't too worried about Dale though. He has been an adventurer all his life. In 2015 he paddled the entire Mississippi river in 80 days! Granted, SUP was something somewhat new to him but paddling wasn't. 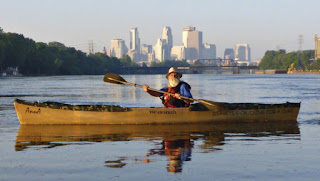 The hours of cool night made for good paddling. Our pace was slower at night but we kept steady. Despite a long day of paddling the fellas kept paddling steady through the night. Dale would paddle for hours and then slump down in his camp chair and snooze a bit. Easily I'd say Dale put in 12-14 hours of solid paddling daily. I know 18 year olds that can't do that. Jerico and I jawed away with each other and talked about most everything. A little about Dirty Nancy, a 1971 VW bus he owned in the 90's which now resides in my driveway after we rescued it from the woods of Mississippi last year. To women, life, music and learning. All the while he was smiling and saying I can't believe we're still hauling ass.

And haul ass we did.  We made Glasgow paddling in the dark and later witnessing the first sunrise of the race.  Pulling into Glasgow late morning we were pretty tired.  We got the report from Brenda where all the other paddlers were. Lauren, Frank, and Ryan were all 15 miles ahead. Chip, and Phil were a few hours behind us. So we lodged the 123lb greystoke board on the boat ramp  and clambered up to where Brenda parked the Big blue Bertha B*tch and found Tj Holman had joined us to help crew.
Always smiling, TJ Holman 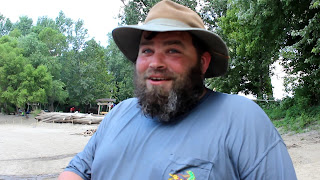 This was a much needed break for the team. We were all a bit tired and needed a rest and to get some good solid food in. Total tally=142 miles.  We each found different spots to sleep after wolfing down some grub. The highlight for me was the Asian style food truck that was up by the bathroom. As I waited for the lady to cook my food she gave me a free watermelon drink that I gladly sucked down.  Some type of noodle dish came out and it was amazing. Amazing enough to cause me to expeditiously walk to the bathroom.  Nonetheless, after my trip to the commode I walked back to hang with the team and found everyone lounging which I gladly did too.

Not too long after I woke I got to see Chip and Phil-O-Cookie paddle in. 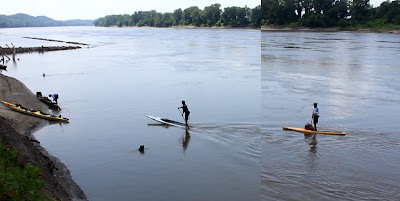 They were hung up by another paddler through the night that they helped limp along to get into Glasgow. They were a welcome sight to the Greystoke crew as we pretty much paddled by ourselves all night and had not seen any of the sup paddlers since we left Miami.  They were in good spirits despite the night paddle with a disgruntled paddler in tow. Phil was all smiles and no talk as usual. Chip was all smiles and all talk as usual. I love Chip's demeanor in tough circumstances. Calm and collected. He reaffirms that what happens in life is supposed to the way it does.  All for a reason. I believe he's right.

I guess we were there long enough that dale grew dreads!
(with the help of Rod Wellington of course) 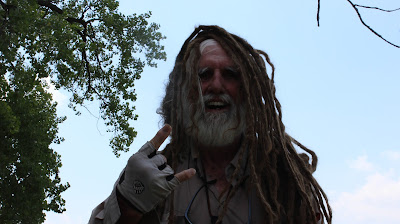 After we had our lounge session we decided to load up and press on. The goal was to make Katfish Katy's before Thursday (Day 3) morning, get some sleep and paddle on to Jeff City to get in late morning.  This was a long stretch. 42 miles. Roughly 7.5-8 hrs of paddling going into the evening. We'd have to maintain about 6mph to get into Katfish  paddling steady.  Yet, the paddle was not too bad knowing we were going into this: 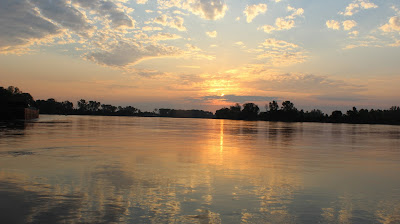 Keep in mind its still a heat index of 100+ everyday. We're sweating bullets and having to keep close tabs on our hydration and food. Dale has been down this road before but not on a level this extreme. Jerico has never pushed this far in a paddling race. So my concern was for their health and keeping hydrated. I felt like a father always asking them,"you drinking enough". You getting those electrolytes in"? When's the last time you had an electrolyte?"  An odd position considering Jerico could be my dad and Dale could be my grand-dad. But the fellas had their needs down. They continued to push hard paddling through the evening hours.

Some of the most rewarding times were when we collectively decided to all jump off the board in the river. Generally it happened 3-5 times a day.

Dale jumping in off the side 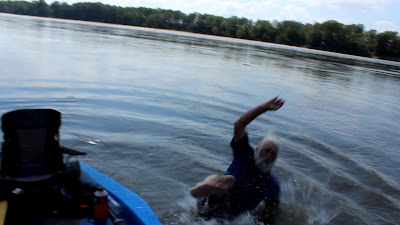 The night passed easily and we paddled into Katfish Katy's arriving before 3am. Brenda was awaiting our arrival ad happy we me it with no problems. We caught a ride on Ron's truck up away from the ramp and pitched tents.   I asked the fellas what they thought for sleep and somehow ( I think I pushed the time a little) we went for 2 hrs so we could get on the water before daybreak.  So like scurrying rats we went our ways to find a place to sleep. Dale's patterns were becoming apparent to us. He sought out the more secluded and high ground areas away from everyone. Years of adventuring gave him knowledge of how to get good sleep.

2hrs went fast. I awoke in my one man tent by someone touching my leg. I jumped up ready to gouge someone's eyes out. False alarm. Just Brenda doing her crew duty. Apparently I sleep likek the dead. Silent. unstirring. Words dont't wake me. Touch startles me.
Good thing we didn't sleep too long, or should I say good thing For Bryan Hopkins being at the checkpoint. Apparently while we slept, the Greystoke drifted off the banks and out into the river. Bryan told us he has to wade/swim out and save it!

Crisis averted, we gathered our gear and loaded up. The next stop was the one Jerico and I looked forward to most of all out of the whole race, Jeff City, Noren access. Better known as Wilson's serenity point. Our beloved river angel, Joe Wilson, was waiting for us. A man you will never forget if you've ever met him. 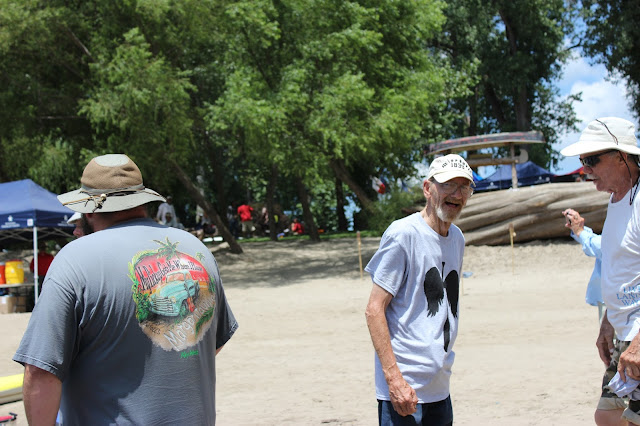